The Times has revealed that vital sections of Lethabo power station, in the Vaal Triangle, which contributes about 10% of the energy carried by the national grid, is buried beneath tons of ash. The power station’s near-collapse has been a month coming. Employees have repeatedly warned of impeding critical equipment failures. But the warnings appear to have been ignored, resulting in conveyor belts used to transport ash failing. The failure has led to two of six power-generating units being unable to function.

Compounding the power station’s problems is a leak of highly toxic acid from the spillage catchment system. This is yet to be repaired and fears are mounting that the acid could seep into the area’s underground-water system. Earlier this month a silo collapsed at Majuba power station, in Mpumalanga, and several generators were shut down for planned and unplanned maintenance.

Two weeks ago, Eskom management instituted load-shedding as the national grid came under increasing pressure. Eskom CEO Tshediso Matona denied two days ago that the problems at the power stations were because of poor maintenance. He ascribed them to “random incidents that we cannot predict”.But a Lethabo insider yesterday said management had been warned about the likelihood of conveyor belt failures and other problems, including impending chemical spills. “It is a disaster. The plant is falling apart. Months ago they were told it was dire. Warnings were ignored. On Saturday, units two and three failed. They tripped because the ash from the hoppers could not be emptied quickly.” 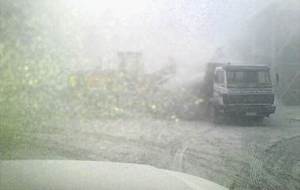 He said the ash build-up was huge, “especially inside the plant”. “Vital equipment is covered beneath tons of ash. The emergency ash-collection area is overflowing beyond legal limits. “The situation is so bad that at night ash is being blown out above the legal limits to try to get rid of as much as possible. “Tons of ash are blowing over Sasolburg and Deneysville and their informal settlements.” A Deneysville Clinic nurse said there had been an increase in people reporting respiratory problems – on average, 10 a day. “We thought it was a change in seasons, but it’s not.” Hein Lourens, Deneysville’s pharmacist, said he has had to restock medications for chest infections several times. “The problem is particularly bad at night.” He said that when he drove towards the plant last week it looked as if a heavy rain storm was hanging over it. “Not until I was there did I see that it was ash.”

Eskom spokesman Sipho Neke confirmed the failure of the ash-plant equipment. “This resulted in significant ash backlog on the precipitator hoppers – filters that remove dust – of all six generating units.
“Another unit was offline for repairs and production from the other units was reduced to lower emissions. “It is not known how long it will take to restore the units to normal operational level,” he said.
Neke said the conveyor belt breakdown was not an isolated incident. Neke blamed the generator downtime on unreliable ash-plant equipment and lightning. He said maintenance teams were continually making repairs but had fallen behind schedule and the ash backlog was a consequence. Neke said Lethabo was operating within legal limits in terms of emissions – and would be forced to shut down if it did not.

Energy analyst Ted Blom said the coal used at the plant was close to as useless rock as one could get. “Eskom deliberately uses this coal because it comes from the country’s largest reserve blocks that are left.” He said Eskom had an alternative, which was to mine coal in the Free State. “This is, however, a lot deeper than the current coalfields.” Blom said Lethabo was designed to produce almost 10% (3700MW) of the national power grid’s requirements (40 000MW). “Of the 40 000MW, a sixth is not available because it is hydropower and the country’s rivers are dry. “Another 4 000MW should be supplied by gas-powered generators but the gas systems are designed to work for only two hours a day. “In terms of 24-hour-a-day capacity, just over 34000MW were meant to be supplied constantly.
“Of the units supplying this, 10% should be under maintenance, leaving 31 000MW. “The problem is that, on top of the 10% [lost because of] planned maintenance, Eskom has another 10% [lost to] breakdowns, leaving 28000MW – not enough to power the country.”

Blow said lots of power plants were fitted with pollution scrubbers. “The problem is is that if you operate them, they require 10% of the plant’s power to operate. If you are in trouble like Lethabo and you don’t have enough electricity you turn them off, giving the plant a higher power output. But it’s at the cost of pollution.” He said that, since 2010, under former CEO Brian Dames, Eskom had reduced maintenance work by 80%. “This caused slag build-up in the boilers and boiler meltdowns,” Blom said. He said the only way in which Eskom could maintain its energy output was to use its gas turbines.
“But the problem with this is cost. Last year, Eskom burned R10-billion of diesel on a R2-billion budget. “If they continue to burn [gas turbines] at this rate it will cost them R120-billion, exceeding Eskom’s R80-billion turnover.

“We have a power meltdown”

Blom said the solution was easy and could be done within 12 months. He said allowing private households to erect solar panels and feed into the national power grid on the basis that they were allowed to reverse their metres, could solve Eskom’s woes. “It would, however, mean the utility would become insolvent because their revenue would be reduced substantially.”

And by the way: The current load-shedding that started on Thursday, 4 December will run right through the weekend, compliments by yet another Eskom blunder: Eskom forgot to order enough Diesel for the support generators……. No More Darkness, please … and where did I hear that recently?